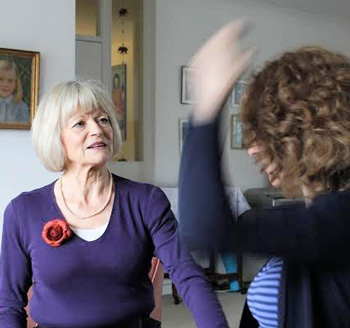 Speak Up! Finding My Voice

I signed up for Speak Up because I have always had trouble expressing myself in situations when it mattered. I dry up. I feel stupid. I blame myself afterwards. I needed to get over myself.

I had just had my fourth or fifth class; we were nearing the end of the course. I wasn’t too good at blowing raspberries or talking with my tongue hanging out and the prepared speech I had given caused me to shake uncontrollably. But I enjoyed the discussions generated by the exercises that we did and the contributions of the other members of the group. I felt I had a way to go before I would be a confident speaker but I was on the right track.

Then I broke my hip while I was alone in my house. I managed to get to a phone and ring an ambulance and a neighbour with a key to the front door. After that my life was in the hands of others. I had no control. I did not panic and more importantly I did not dry up. I found I was able to focus on the people that were helping me, to connect with them on a personal level, to ask them about their lives and to thank them genuinely. After the operation I was knocked out by morphine, but I noticed that none of the other women on the ward spoke with each other. We listened to their conversations with their visitors, their shouts in the night, but we didn’t talk amongst ourselves. When I was feeling a bit less drugged I surprised myself by breaking the ice with my neighbour one day at lunch. She had given the impression of being a haughty upper crust snob, but I discovered that she was quite an interesting woman. She blossomed with the attention. So did the others in turn.

I left hospital and thought nothing of it. At home I needed the assistance of carers twice a day. I never had the same person to help me. To make it bearable for them and for me, I again tried to connect with each one. They responded. The following week I went back to the hospital for an x-ray. My daughter pushed the rather awkward wheel chair. I chatted to the people in the lift, the technician, the other patients waiting. We all had a laugh. I asked my daughter later if I had always done this and she said, “No, I think it is that Speak Up course you did”. I thought about that and wondered if she was right. Always concerned with audience reactions, I then asked, “ And how does it go down”. She replied, “ You seem a bit desperate to talk to people.”

That stung. I pondered it for several days. I dried up. I felt stupid. I blamed myself. But then I had a revelation. I am anxious to connect with my fellow man and in my small way I did it and we all felt much better as a result. Thank you Annabel.